Mimicking the shape of the background treeless hills and employing a palette of meaty pinks, reds, and browns, three large blind cows in dramatic shadow march briskly and ungainly across the canvas from left to right into a vaguely described pool of grayish-blue water.  Another set of three cows, up to their shoulders in the distant stagnant muck, sit unmoving, side by side by side.

Smith’s powerfully emotive subjects appear still and singular or in groups that are in the middle of some habitual migration.  Sometimes limbless, and often heavily textured, the representational images abstract and disintegrate awkwardly into their surroundings or expressively appear in illogical combinations of udder, face, and flank.  Scraped and pathetic, drippy and flat, these cows, and in recent works, birds, and men move through their world toward a distant and unrecognizable goal.  They are, of course, stand-ins for humanity as we traipse here and there on daily (or life-long) quests to find food, sex, shelter, or freedom.  Should we be depressed or empowered by this realization?

Brandon C. Smith’s uncomfortably epic paintings uniquely undermine iconic images of animal and land.  It is this tension that propels these perplexing works and keeps them at the forefront of one’s consideration. 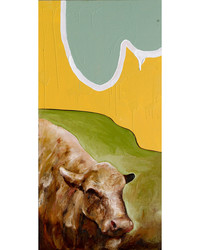 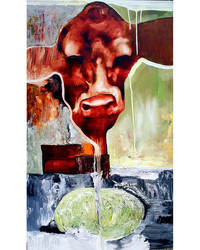 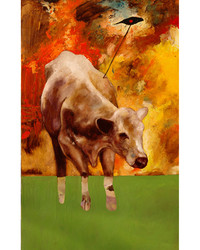 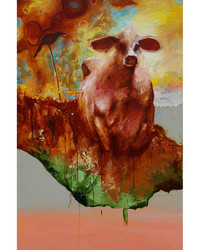 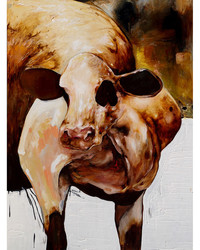 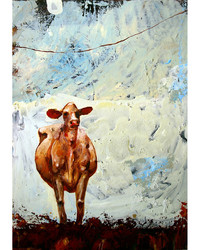